one day, i was walking in the forest, by the lake. through a storm that had come very quickly. the wind was strong, the lightening crackled. the thunder shook the water of the lake. upon the lake were birds. the birds all left but one. across the lake there was a cabin, little and old. someone went inside and the door crashed shut. the storm grew in rage and darkness so that i could no longer see. through the torrent and wet sky. i made my way desperately to the cabin. i knocked and no one came. i stood on the porch watching the one bird float on the reckless waters. the one black and giant bird. i felt someone watching me through the window. i turned around as eyes flashed and the face was gone. i looked inside and there was nothing. the window shimmered and the rain kept falling. the bird who was floating spread its winged and looked up into a big black cloud. the bird opened its mouth and nothing came out. inside the cabin i heard ghostly music, creeping and sudden the music spun and cried. i turned around again and saw those eyes, watching me. flash and disappear. upon the porch I sat, with nowhere to go. looking in, looking out. finding only a mystery. made louder by the storm on both sides. it began to get cold and dim. i decided to knock again for an answer. actually i pounded into the wood with both fists and i was ignored. maddened by the maddening twilight i decided to turn the knob and it opened. the old door creaked, my heart raced in my ears. a shadow burst out like a cloud. a quiet bat surveyed from behind my eyes. those eyes, i began searching for the cabin’s inhabitant. “hello, hello!” i yelled into a gray room. moving slowly i decided to be brave. i looked and looked and found only fear. in my body the ground dropped. my spirit quivered. i was alone wherever i went. the storm went on the entire night. i fell asleep on the floor. a little bird entered my dreams and told me i was not alone. i woke up to the sound of movement from the other room. bravely i entered the small dark space and saw with my own two eyes someone sitting in the corner looking down. in a flash our eyes hit, the walls shook. the room became light and scary. a voice said, “how far have you come?” i said, “from across the water” the voice said, “did you see the eyes that caused this, the bird that floats and screams to the sky?”

“yes, i think i did.”
“do you know where you are?”
“in a cabin on the lake.”
“no.”
i became very afraid. the voice whispered,
“you are underneath.”
at those words i sank to the floor and grew quiet. after awhile i lifted my head to the sound of breathing and the nights open sky. there was no roof and nobody next to me. i was alone upon a mirror covered in clouds. midnight was steeping. there were only the stars, left with me. the world had disappeared. i do not know how i got here or where you are. i dream and i dream these words mixed with tears. stiff and sinking until the moon reappears. my lonesome searching always ends the same. light strikes my eyes. because in the hollow of my heart there is a sky that I secretly hide under. for no reason but to find the beauty in what’s broken.
sharada devi 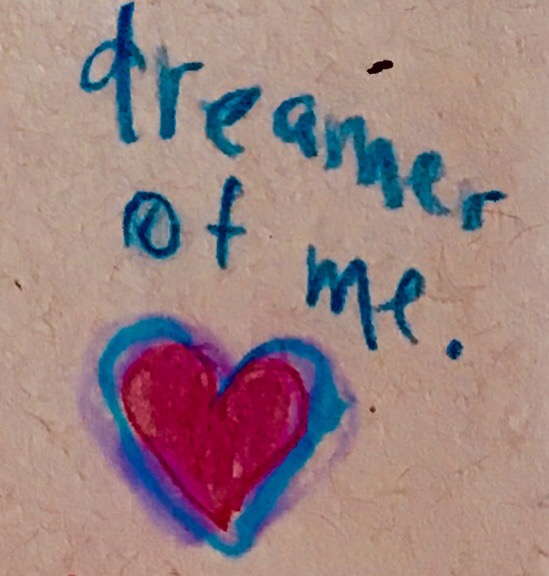 5 thoughts on “the beauty in what’s broken”