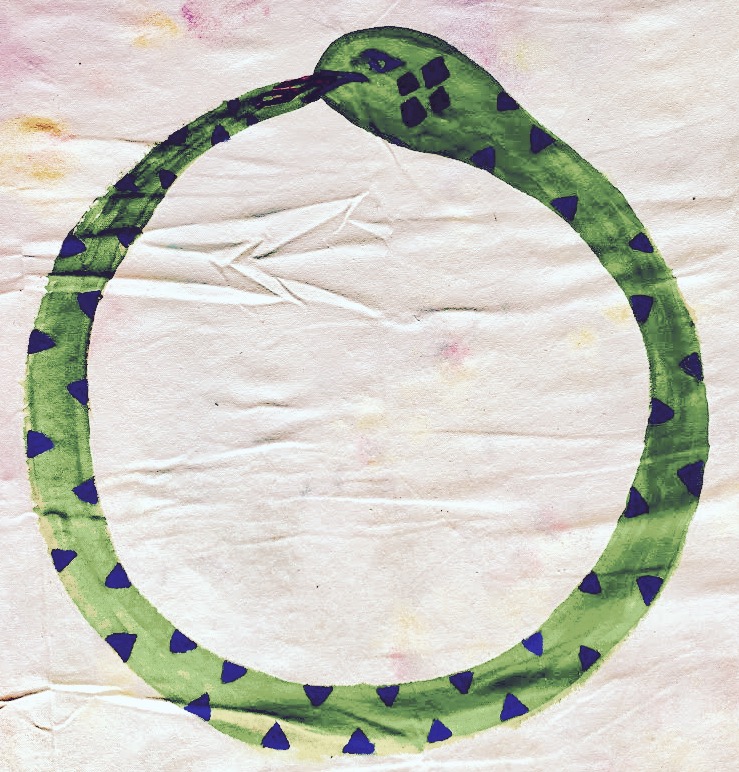 She wore a masterpiece around her neck. 300 circles with secrets inside. She bore the canopy from this realm to the next. She walked upon the border, looking. She hid her secret hands. The words inside the air and sea. The words crashing and burning the skyline. She hovered watching the words take shape, around her neck. This body of hers much larger than eyes. She foretold and she erased. The moments wept beneath her gaze. The earth would change sides, the shift would create a large hole and every circle would fall through releasing it’s secrets in plague and in ritual. Not everybody hears words the same way. She is heard mostly in the silence while the lights are overlapping. When the clock stops, when a new moon rises. There are roads we have walked on up sides of deep cliffs. There are mountains where the ghost still lie, buried under rubble. There is this place we created long ago unforgotten by her. She hides without moving a thing. Month after month she grows wider and lighter. To return and to recite the long journey upon paper. To drift in the storm pretending it’s resolvable. To penetrate down before anything started at all. To quiver inside the earth as she passes. The clouds come and go hiding impermanence like a vacuum. There are eyes that are so wide everything gets inside them. A mouth holds every answer like the sun holds every morning. And I once went outside when I heard her calling. I stood and I listened to nothing and the sky folded in half around my undernourished body. A light broke free. Starving and vivid. “Tell me what to say…” I had no words. My mouth was dry. Across my body was a river that drank the sea. Near the river upon its banks was a tree that bore its tongue into the dirt. I didn’t say anything. There is no match for a circle this large.  I slip inside and outside of my sleep. Nobody hears me. The end is near. An egg hangs from the tree. Fruit from another world, unheard as it ripens. The groaning and moaning. Take me down to where she hides from the beginning with all this scripture and purpose. Will there be a messiah. Do prophets understand what it means to exist beyond dates and gods. I never understood why nobody undresses the snake they carry. Why all spirals hang in gloom and defeat. Why plates are filled with deathly foods and why women wear underwear to cover the sun. Why river after river we die trying to be born. I hear her. I wrote everything as I swung from her neck. I will soon fall and be forgotten. I will add to letters and holy vessels kept stored. Down in the underworld where the sky is below me. Down, deep down where I drink from the sky.  The water bearer, the secret language. The touch of her slight wing, it’s barely heard. You have to be still, gentle and alone with this grief. To know me, to feel the soft body of passing stars. To drift along this axis breathing and exhaling the loss. The loss of words, sound vibration. Frequency be still. She is born from a moan. Little tapping underneath me, the clock drags across the room but I don’t listen. My skin is see through, pixels of fading memories rise to the ceiling and loom. I feel a river of blood inside and like the tree I reach deeper eating toward my death for these words that the world must hear if I was here. To exist as a fragment, to engulf the mediocrity. To churn and to expel. These 300 circles do not die, they explain themselves in her masterpiece. I am written as I write.  Sharada Devi

7 thoughts on “I am written as I write”