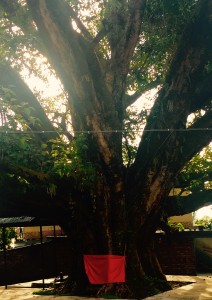 Where is the forest? Here I am in limbo. Back in the little hovel yurt and dome. Bhagavan Das stayed in Guatemala. You know we’re doing the retreat together in June but the rest, it’s over just like that. Because of me, the dogs are gone and I destroyed the entire thing. It’s surreal. It’s ok. But limbo is it for me and I am searching inward what to do. I am hoping the same of you. I have so much faith in you to guide me and I pray you will give me feedback. I basically have no reason to be any particular place. I was thinking of somehow opening a place like a yoga studio but not exactly- because it’s the real yoga I’m after- where the postures are only a fraction of the equation- you know what I mean. Something low stress and sustainable that is in a pure, conducive setting and will support people in a deep all encompassing way. It’s just that I’m sitting in this graveyard yurt with dog ghosts and his residue everywhere and cannot think as clearly as I might about where this would be in the USA…and so do you have any intuition or insight on this? I don’t want to be in this dead cell but I’ll stay as long as I need to…I have to get Kali out of storage in NY. I now have an EXQUISITE CRYSTAL TARA. And the mother light calls…but from where…how to start, what to do…I want out of past associations that confine and demean me …and it’s a big deal. The emptiness that it’s all built around. The fact that nobody really cares and never really did. I’m just sitting here, in limbo…went to the river, sat in the sun, felt depressed and anxious, felt free and lost, felt old and worthless, felt nothing. Felt like writing to you. Felt like it’s all a waste of time and yet somehow I’m still alive. Many think everyone loves and supports me, it’s such a sweet and high minded gesture…and I know many do and have humbled me with their generosity and kindness….but mostly my worth is in connection to this monster I’ve created that took over my life. Yes it was sincere and true and yes Bhagavan Das is very powerfully special but the show biz part and the tiring pitiful low-grade glamour is too much, the burden of the dark weight that almost killed me twice. My life must mean more than that burden. This entire occurrence by the way was totally beyond my control. This thing became someone else overnight…and he knows it I told him and so believe me “he” knows it. But he is doing his monster thing, whatever was going on deep inside has risen and demands reckoning, I knew it. The little girl wasp grabbed his wrist long ago. “Don’t forget me.” She said. I always reminded him, but he didn’t seem to care. He pretends it’s because of me but he knows what he did, we both know whose in there…I don’t know if I should post this but I might. He’ll read it and he still won’t care, maybe you won’t come to the retreat but you should. We are soul friends forever, I love him, he is a 100% sincere Gid loving person unlike any other I have ever mer and his song is in my heart. Either way I’m getting this out there, I think so. He would want that even though he’s denying my words by ignoring them…and I’ll post it so that everyone can just dump me right now if that’s the plan and get it over with just like that. “She’s so awful, he’s so holy.” That would be helpful just like Osho said. It’s better they don’t think much of you and therefore nothing is expected. I like that position. You don’t know my life at all. I am a private and secretive person, it seems like I reveal all but I hide everything, that’s the truth. But sometimes I unleash unruly things because I must, it’s mysterious and destructive and I am not in control. It may seem reckless but it’s all written in the wisdom of the stars. How to find peace, to create out of your own dying a new life. I have always been sincere and held my integrity as humanly as possible no matter how I was degraded. I am not a hypocrite. I intensely practice what I preach and so I destroyed what was already dying. It’s called mercy killing. And so here I sit listening to a trickling creek on the first warm day since I returned to the past on Friday. I have no ambition, no enthusiasm, no direction, no nothing to move me away from the crypt. And yet move soon I must as these old voices are disturbing. It’s getting late…the daylight is fading…as I write these words a shadow jumps in my lap…I’m ok…I hear a bird making noises far away and I wish it were me…somehow redemption is at hand…because I won’t back down. Sharada Devi

39 thoughts on “because I won’t back down”