These people worship her as the moon, they themselves, being her light. I worship her as you and then again back to me- you lunge like a shark at the blood in the water-striking deep at nightwounds that only I can see. I used to be alive in that world you thought was ours, In that world where it mattered if we sank. A blue eyed holy mother who chases her tail, whipping the void as she thrashes. I can’t swim, I can only float, face down in the soma, dripping wet with me. As dead as dull flesh torn from matter, the sky barely lit while she stares down at dawn. These people are her bottles of moonshine. And people aren’t real, they’re only mistaken, for where we fear to go -is back. The magnet of the beast who rules these waters pulls blank, soft celled corpses from her web, the crimson womb, sticky and bright. From where these waters arise they become separate and hunt the skies for more of her. Drunk on seance and the purple haze, dreaming the sequence of her phases, I drop the anchor into my hot chest and rip my heart to pieces. Don’t leave me, we have somewhere to go. The lost barracuda, the tripified snake, the word doesn’t have to be a word. Splashes and backlashes, the honey waters of home. There are craters in the moon from the fist who enters slowly, pulling two legs, its breach, its phallic. The worn testimony, the way you look at me, the water stains on the mirror-I remember nothing but anguish. Shooting flashes through the sky, a brave and wild stag flies into me like this happens every day. And her memory collapses, and the early beings are awoken. The stash of another drone, the drug of another species, the pulse of leaving on the wind. Drawing circles we can’t see, a huge net drudges for whoever’s left. I told you, people aren’t really real, it’s staged, it’s a mistake. We’ve been forgotten by our maker-the wagging tongue that licks the marrow, the leviathan of a sister realm. The stars are fixed and she will come again dragging the reins behind her. Drinking herself like you weren’t even there, just a fixture in the bible. To give her new seed, to blow up in her mouth. A revelation, eyes that saw the furrow of the great. Leadbelly. Heeling at her feet. Something else besides tomorrow will come again. Sometimes I see what I used to have and I wonder who you are. I remember the black fire spitting back like we were wrong, I remember being hungry and thirsty. I remember hiding from that light that approaches anything that breathes. I’m not afraid but the blue steam rises anyway- and the chirping is perfectly timed so that we have no idea when she’s coming back to find her moonshine. The worms crawl through her and she’s made from tiny holes that we can’t see. The worms become her. We should be careful who we give our hearts to, where we stick our key. I feel there is “some thing” that feels me and it is bigger and terrifying and moving downward. The spiraling quickens and the screws go madly into body parts that are open.
“Calling all vessels! Calling all vessels!” She’s looking for a man. Holy white water, I’m not alone. Pieces of you have been found everywhere and I’m getting dressed as fast as I can. They are entering from every side, surrounding us with electric wires and burning stakes. I hear them crashing like waves onto the shore. She is coming. And it’s for sure this time. Into her mound of ecstasy the night crawlers burrow for more…

When I was 29 I cut off all my hair one day so that it was only about 1/4 inch long. I meditated for 10-12 hours a day and consequently went just a little bit insane. I could hear them tapping always to get in, you know those “things” that make you crazy. There was a big black hole I would slip into at night. I was afraid by now. Because I know too much this time- and the truth’s a scary bitch, she really is, it’s true. The wind chimes were telling me things that I didn’t need to know and the little piranha that live inside the shallow astral space were gnawing at my heart all the time. The devil would whisper into my ear that he was going to kill me and everyone else was giving me information to store…what couldn’t be held in the crystals I would later discover, was the greatest secret of all, put into me like I was a vault. Don’t believe me, they knew you’d say that too. None of it makes sense. The devil is real though, that’s for sure- and he’s friendly until you ignore him…but he’s not what you think, because there’s more than just one devil- there are billions of devils…and she devils and baby devils too. I know what’s on your mind, I’m a diamond that’s filled with the sky. They’re there, in the sky watching. The moon isn’t real and neither are people. There is only the sky and the water. The knower and the known. What’s being viewed is a bad memory of the way we were. I know something big. The diamond is the body that can’t be destroyed by the worms. Covered in holes, it’s almost too late. The crafts that hover above us are filling the atmosphere with a protective humming to block the high whistle that breaks open our fate. There are those who plan to destroy us or consume us- then round up our souls and put us in the dungeons of a place that we dare not name. The waves are pulling the people underneath and dimensions are cracking and doors that should remain closed have opened. Take heed. She’s big and cold and doesn’t have any preference. She’s intelligent and hollow, eternally combustible. She is a terror born of nothing and beyond touchable.

The prophecy has a cover.

Summoned by the will of the many lords who guide us. 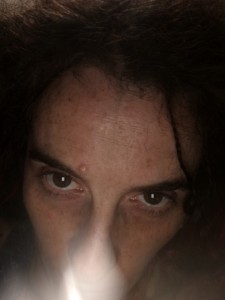